This article was illustrated by Julia Wang, decorated by Ainsley Wagoner, laid out by Travis Gertz, and edited and produced by Andrew Maier.

As a designer, behavior analyst, and social researcher, I believe it’s my job to constantly ask questions about the nature of my work. And I like to believe it’s something I’m getting better at everyday: my questions increasingly help me see opportunities to effect real, lasting change.

But I didn’t start here.

I began cross-legged, in a room filled with childhood playthings. In front of me was Collin, an enigmatic five-year-old. Collin may have been diagnosed with autism, but over the next three years Collin was the one who taught me to slow down and search for the humanity behind the diagnosis.

Working with Collin literally changed how I thought. It highlighted the fact that human beings are not black and white, that we constitute many shades of grey. Collin taught me to see the opportunities that real, empathic dialog presents us with.

In this article I want to expand upon my experience working at the intersection of people and software. Specifically, I propose digging into complex social issues and behaviors by questioning our premises, the words we use to communicate, and the labels to which we ascribe ourselves. It’s my belief that starting with questions can help align us in our quest for shared understanding and place us on the path towards the creation of meaningful solutions that work for everyone involved.

Whenever they arise, topics of identity entice us to quickly choose sides. This starts us off on the wrong foot, however, because it creates a no-win scenario in which only one side can be victorious. It’s kind of like starting a race going in the wrong direction: every step we take gets us further away from the finish line; advancing our argument only serves to increase the distance we place between ourselves and “the other.” Whatever sense of “right” we feel is sullied by the fact that we’ve positioned ourselves further from compromise.

During this year’s heated protests against police brutality in America, I sat back and watched my Twitter feed fill with tweets of anger, hatred, disgust, and pride. Soon enough, oppositions were built: protesters marched along chanting “black lives matter” and “I can’t breathe.” Police retaliated with “blue lives matter, too” (and turned their backs after feeling betrayed by their mayor). I sat at home and marvelled at the speed with which people had placed themselves in opposition to one another.

How we could we have prevented “black vs. blue,” “government vs. citizens,” and “us vs. them” thinking? Warren Berger, author of the book A More Beautiful Question, seemed to have the right idea:

In our lives, in general, there’s a tendency to move along on autopilot when we really ought to be in the habit of regularly stepping back and questioning everything—about our career choices, about our attitudes, about the ways we choose to live. Questioning is good for us. It can help to open new possibilities in our lives. It’s a first step in solving problems.

Reacting automatically to someone else’s beliefs and behaviors by quickly building a defense against them—or worse, slapping on a solution—literally prevents possible futures. Asking questions instead allows us to understand one another’s complexities and see the very real factors that affect an issue. It’s the only starting point for real problem solving.

Crawl before you walk

This year my Code for America Fellowship1 team and I are tasked with rebuilding trust between citizens in Vallejo, California and their police department by creating a tool to facilitate communication and engagement around public safety and justice. Over the past couple years Vallejo has faced similar problems as those seen in Ferguson, Missouri: six officer-involved shootings in 2012 and crime rates that rank it as one of the least safe cities in the country have taken a toll on its communities—all of which means there’s a lot of work to be done.

My teammates and I feel lucky to be working on such a relevant issue, but we’re also a bit overwhelmed as to where we might begin. So instead of taking a position or side we’ve decided to start with questions, such as:

Beginning this way has inspired discussions and lightbulb moments. When we got to talking about Neighborhood Watch groups in Vallejo, for example, we asked “What does it even mean to watch a neighborhood?” Thinking critically about “watching” helped us see that watching is passive and carries undertones of distrust. In that case, did we really want to build something to help people better watch their neighborhoods? Instead, we reframed the question: “What would it look like for a community to actively ‘do’ with its members?”

Designers in general—and civic designers, especially—should never take a design challenge on face value. We must always pick at it, flip it, and question its premise. Questioning the question allows us to better see the multitude of factors affecting an issue, all which must be addressed by our design solution.

Asking questions helped my teammates and I see that things weren’t nearly as black and white as we otherwise might have thought. When we dug further we began to see how words, especially those expressing abstract concepts, often elided more than they revealed: the definitions of “trust,” “justice,” “safety,” “solving crime,” and “fostering communication” depended upon whom we asked, for example. To a police officer, “solving crime” might be writing a report and filing it in the system; to a citizen, it might mean providing a sense of security and safety and peace—which can actually require much more than making an arrest or filing a report.

Differences in definitions sometimes results in distrust—yet computers only think in ones and zeros. This makes it especially difficult to use computers to increase “trust” and “safety.” Fortunately, this is a topic Diana Nucera addressed last quarter in her article Two-way Streets. There Diana explained how the Detroit Digital Justice Coalition worked together to develop a common understanding of what digital justice meant to the community itself. That understanding now informs the direction for projects throughout Detroit (and around the world).

Finally I want to talk about humanity. Asking questions and clarifying abstract concepts has helped get our team on the same page (ensuring that we all move forward with a shared understanding). But we’re all humans; living, breathing, thinking, feeling humans. We all have deep complexities that motivate our behaviors.

As a behavior analyst, I spend a lot of time asking why: investigating antecedents as well as behaviors and their consequences. Over time, I’ve found this investigative process to be helpful for not only analyzing the origins of behavior but also for reminding myself that humans rarely do things for “no reason” whatsoever. Everyone has a reason (even if it isn’t a socially acceptable one).

Storytelling questions are open-ended and allow the respondent to craft the narrative. Some examples include:

(Personally, I use the stories people tell to map create mental models. I find this helps gets me closer to qualifying the experiences that make them human—closer to understanding their “why.”)

Storytelling helps us remove the labels that we often place on one another. It helps us realize that a “cop” is actually a compassionate father that makes cupcakes and sings karaoke on Saturday evenings with his little girl—just like my dad did years ago. It helps us realize that an otherwise-faceless “black man” wakes up every morning and sings Thriller in the shower while he’s getting ready for work—just like you might. Storytelling reminds us that when we’re talking about hate, disgust, exile, and change we’re talking about people’s actual lives. Once we really start to understand the factors motivating peoples’ behaviors, we can use that understanding to find a way to move forward towards a solution, together.

Here’s to the mad ones

And that’s it. It’s pretty simple, really: looking beyond “black and white” rhetoric allows us to perceive the actual shades of grey that unite us.

Civic technologists, interaction designers, policy makers, and community organizers are indeed making the future, but we cannot possibly do this in a prudent manner without first searching for a deeper understanding of the humans for whom—with whom—we’re making. Starting from a place of gut reactions, personal biases, and/or labels that mask the humanity of others will only get in the way of our ability to facilitate shared understanding—it will only lead to shallow solutions to the wrong problems.

Start with what you have now, and ask questions in at least 10 different ways. Dissect the premise. Try asking “What does this mean, what does this look like, who is involved here, and why is this person behaving the way they are?” Turn the questions on their head. Flip “How can we build trust between the community and the police?” into “How can we dismantle trust between the community and the police?” See where the questioning takes you. See what understanding it opens up.

Asking questions instead allows us to understand one another’s complexities and see the very real factors that affect an issue. It’s the only starting point for real problem solving.

Remember to zero-in on abstract concepts with questions like “what is trust, anyway?” Question the words you’re using to build your ideas: does the group you’re trying to help define “trust” the same way you do? Go find out.

Next, build a manifesto that defines exactly what you’re talking about when you say “trust”—just like Nucera did for “digital justice” with the Detroit Digital Justice Coalition. Then go from there, together, with a shared understanding.

Finally, and most important, remember that we are all humans and our behaviors are motivated by complex realities. Strive to understand your neighbor. Leave your anger, distaste, righteousness, and need for justice aside for just a second and find the very human reasons behind their actions. Ask questions that highlight their why. Ask questions that get them sharing their stories, their “mundane” intricacies. Take away the labels you’re using to speak about them and use their name. Remember to reference their stories while you’re building the future that will change their lives.

In Warren Berger’s book he says,“We’re all hungry for the right answers. But first, we have to ask the right questions.” I often find that the right questions are never the ones that come to mind immediately. By remembering to question our supposedly black-and-white premises we remember to start together and find the humanity that unites us. This allows us to better pave the path for finding the right answers for the design of all technology—the human-centered governance of our digital cities. 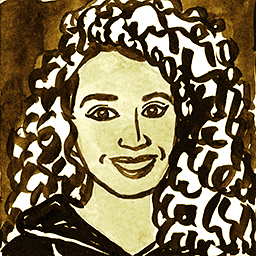 Jazmyn Latimer is a researcher and user experience designer interested in combining social science and technology to solve problems and enhance lives. She’s currently a Fellow at Code for America working with the city of Vallejo, California. @JazmynLatimer