This story first appeared in print on September 21st, 2014 and was published online on September 24th, 2014. It was previously published elsewhere. Title photo by Molly McLeod.

I visited San Francisco’s main food stamps office for the first time in February 2013. People call it, “twelve-thirty-five,” as in 1235 Mission Street. I walked past the concrete pillars, through the metal detector with two security guards, past a table of scattered paper forms and into the main waiting room. It was loud. Voices echoed off the linoleum floors from speakers in the ceiling. There was one big line leading to one big countertop, labeled Service Counter B.

A tall, black man stepped to the front of the line. He hunched forward and leaned his hands on the countertop. A thick, clouded sheet of bullet-proof glass separated him from the service worker. The pair spoke through two skinny, conference-style microphones mounted on the glass.

The visitor was having trouble hearing. He leaned in and grabbed the microphone to flex it upwards, but it wouldn’t go any further. He hunched a bit lower, putting his ear to the glass. Then, after a few more moments, he lowered his knees to the ground, pulled the mic down to his face and rested his arms along the countertop. He finished the conversation on his knees.

So there I was: in San Francisco, one of the greatest and most prosperous cities in our country, watching a man on his knees, struggling to hear through bulletproof glass, trying to access nutrition assistance from our government.

Something is drastically wrong

January 2013 was the beginning of my Code for America fellowship working with San Francisco’s Human Services Agency. Later, in February, I visited the Mission Neighborhood Resource Center, one of San Francisco’s four shelter reservation sites. There, I learned that it can take more than 12 hours to access a shelter bed for a single night, that some people prefer streets to shelters and that clients routinely leave their shelters at 4 a.m. just to line up for the next night’s bed. More desperate clients show up even earlier.

My teammate, Rebecca Ackerman, enrolled in food stamps. She started getting letters. Lots of letters. They were intimidating: 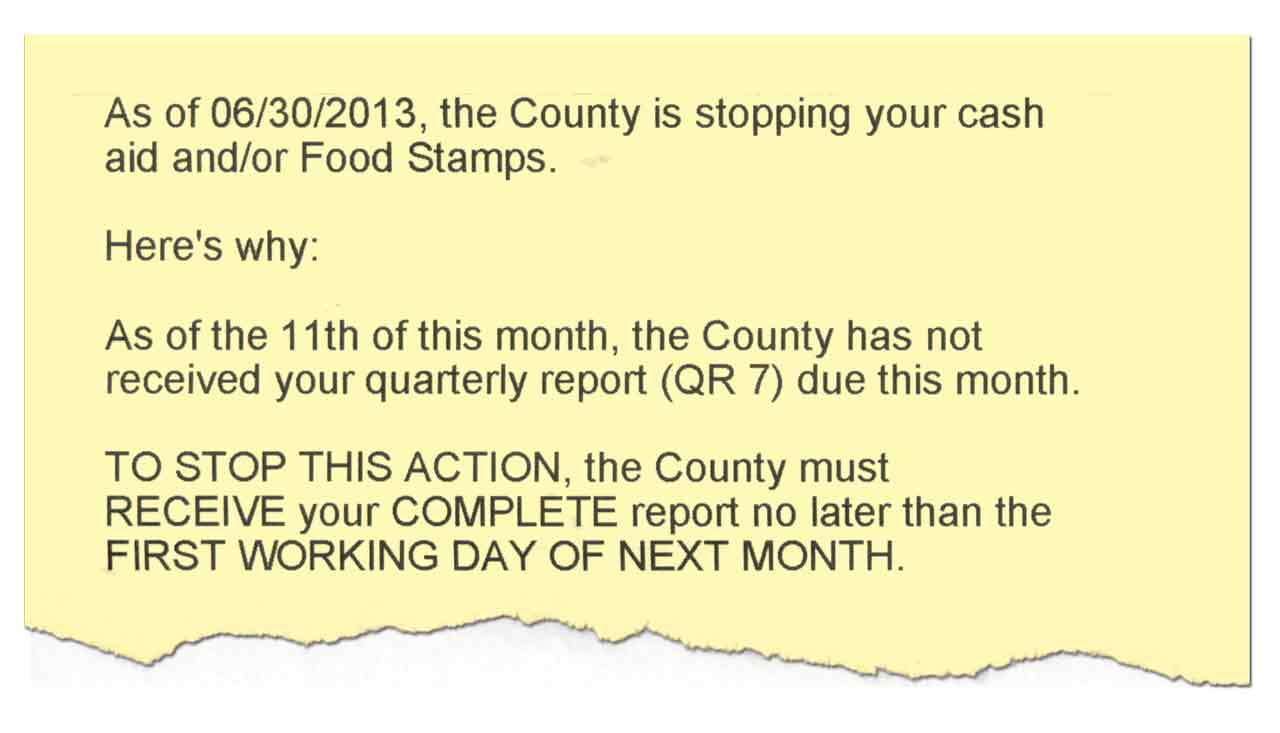 They were wordy and confusing: 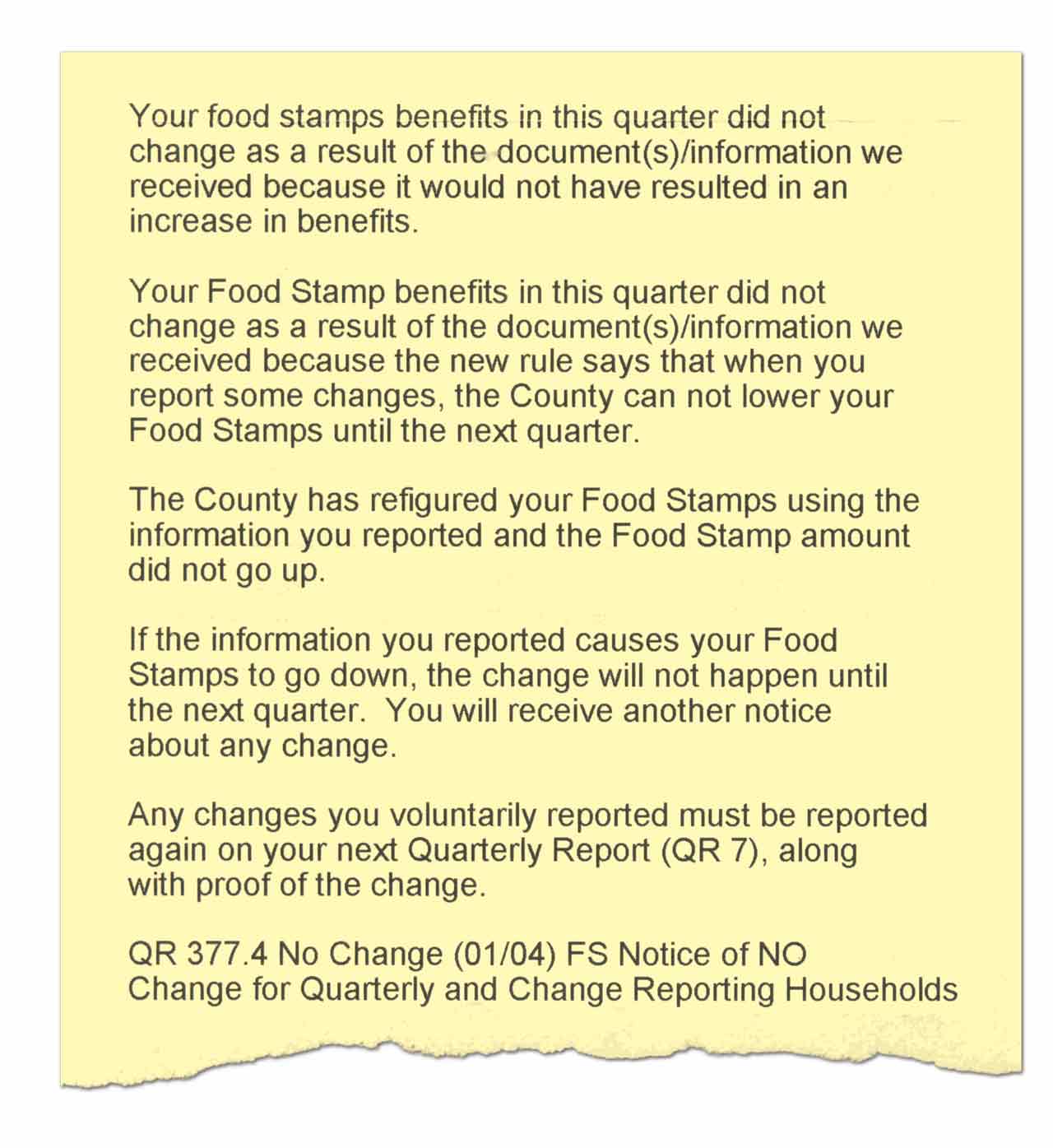 And they were nonsensical:

During her seven-month enrollment, she received approximately 20 letters and her case was nearly terminated three times.

This is the interface to our government: We beg on our knees, we line up all night for shelter and we receive aggressive letters in the mail. Our services disdain those they are envisioned to help.

This disdain shows in huge, controversial, life-changing ways. We take 260 days to get disability benefits to our veterans, according to Senator Bernie Sanders. We spend $3,000 to room a family for one month while the family begs for $900 in cash instead, as reported by the New Yorker.

The disdain also shows in small, quiet, often-unnoticed ways. Try to apply online for free school meals in SF and you’ll find this warning highlighted on the welcome screen: Please only fill out one application online. If you make any errors you will need to fill out a paper application. 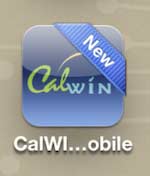 Or download the CalWIN iPhone app, the companion application to the ~$750 million client welfare data system in California, and this is what you’ll see. Yes, the name really is truncated on the home screen.

It’s disdain all the way down. The challenges with healthcare.gov sparked a long-overdue conversation about what’s wrong with government IT, but Ezra Klein cuts straight to the core of our disconnect:

One privilege the insured and well-off have is to excuse the terrible quality of services the government routinely delivers to the poor. Too often, the press ignores — or simply never knows — the pain and trouble of interfacing with government bureaucracies that the poor struggle with daily. That can allow the problems in those bureaucracies to fester.

The problem is not the website. The problem is the man on his knees at twelve-thirty-five and the disdainful machine that doesn’t help him up.

So here we are, struggling against our own disdainful machine, and nobody wants it. The social worker doesn’t want clients on their knees. The CalWIN developers don’t want their work embarrassingly truncated on the home screen. Nobody wants homeless people waiting in line all night. It goes beyond politics.

I wish I could end this with a heroic call-to-action. “Are you with me? Do you want to fix our broken government? Click here to donate now!!” But I can’t. My year spent working with the Human Services Agency clarified more problems than solutions. Instead, I’ll offer a question: How can we build empathetic government services?

My advice is to start with user needs. An empathetic service should ground itself in the concrete needs of real people. It’s not about innovation, big data, government-as-a-platform, transparency, crowdfunding, open data or civic technology. It’s about people. Learn to prioritize people and their needs. It will be a long slog. It’s the kind of change that happens slowly, one person at a time. But we should start.

Amidst the anger and insults of healthcare.gov, Tim O’Reilly reminds us of the immense opportunity:

Rather than bemoaning the problems with healthcare.gov and seeking to find fault and political advantage, now is a great time to seize the moment and commit ourselves to create government services that give all citizens services that are simple, effective, and easy to use.

So let’s gently — but persistently — bring our awareness back to users and build an empathetic machine: one that finds the man on his knees and helps him up. 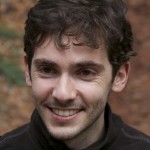